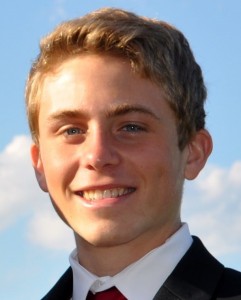 My name is Alex Paddison and I have been an athlete all my life. I am 18 years old and live in Frederick, Maryland.     I will be graduating from Tuscarora High School on June 5th. I have been a competitor in many athletic events including Lacrosse, Basketball and my strongest being; running Cross Country. I worked hard in school and have taken multiple advanced classes including AP Calc and AP Bio, AP Macro and AP Chem. My GPA has earned me the honors of being a member of the National Honor Society at Tuscarora High School.

Going back to Cross Country, ever since Middle School, I knew there was something in me that not a lot of other people had, it was the endurance to run long distances. I would usually get first place in the mile fitness test in grades 6th-8th but then as I entered high school, I played soccer my freshmen year and completely forgot about running. When the lacrosse season started, we had a 3 mile fitness test. I ended up beating everyone, even the seniors! At this point I think the Cross Country coach knew my name because the results were put up for the whole school to see. As I entered my sophomore year, I felt compelled to join the Cross Country team instead of Soccer. That year I was the second best runner on the squad and was only off the top senior’s times by no more than 30 seconds. As the season progressed, so did my times. When I started my junior year, I was the best on the team. My best friend, Senior Brad Baker was right by my side, in practices he would push me and challenge me to no end. I was glad to have him with me throughout the year. This year I ended up placing 7th in the Maryland States for our High School Division.  I was proud of my accomplishment!
During the spring seasons I played Varsity Lacrosse at Tuscarora and as well as playing in a number of summer leagues.

During the off season I enjoy running in additional races.  I ran in the Nike Invitational down in Charlotte, North Carolina. I also started running local races in the Tri-State Area, including the Penn State First Night 5K, Maryland Half Marathon and Virginia Wine Country Half Marathon, the Marine Corp 10K and many others. I found that my strength is in running some of the longer races as I won many of them including the Maryland Half Marathon, and the Marine Corp 10K and came in 3rd place overall out of 2,275 runners in the Virginia Wine Country Half Marathon!

In the fall I will be entering East Carolina University as a freshman.  I will be studying exercise science, with the goal to become an athetic trainer and nutritionist. I want to stay in tip top shape throughout my life and that’s why I love running. It’s the one of the best cardio activities for burning calories, plus it gives you time to reflect on your life; … it’s just you and the road.